I am from Turkey. I live in Izmir, Turkey. I am an Artist and Financial Consultant.
I am painting my artworks in free times. Thanks and Nice to meet you all.

ON EXHIBITION
VIDEOS
Artworks
Artist at Work
ABOUT ME

I'm Semra Sengezer. I live in Turkey. I am painting since one year. But I start to painting at Univercity years. I have a home&office. I am working from Home. I am selling my artworks in a e-trade site in my Country. I am 52 years old. Single.

My goal in life is to became one of great painter of the world, I love painting different still. Nature, animals, flowers, naturmort, portreit, abstract , abstract world and galaxyes, charcoal ..

MY SHORT BIOGRAPHY
Who is Semra Şengezer?
SEMRA SENGEZER Tuesday 19th of May 2020
My Short Biography; He was born in 1969 as the 5th child of a family of 4 children in İzmir. His father is from Marash, his mother is from Manisa. He had no training in painting. Painting talent comes from his genes. His brothers and sisters also had this talent prominently. He was only about twenty years old when he discovered this talent in himself.
He has been interested in painting for the past year. Four-year IKTISAT Faculty graduate, Author, S.M. Financial Advisor is a Freelance Painter.
After God came into my life, he started to shape me.
As a hobby, I love guitar, painting and chanting. Also how to grow flowers at home.

Description of a Painting Interpretation of "Jesus Is Risen" Table

Interpretation of a painting made by an artist
THE NAME OF THE TABLE "JESUS ​​IS REVISED"
This painting must be a Christian painter. Because there is a very deep meaning in the painting. On the day Jesus was crucified and died for three days, the earth fell into darkness. The curtain of the temple was torn throughout. The sky and the earth abandoned themselves to a terrible darkness. Jesus overcame death. And Jesus was RESURVED three days later. Light rose to darkness. The Earth and Sky became enlightened. A great light appeared to the people walking in the dark. Most of the people saw Jesus again, they witnessed his resurrection from the dead. This is the best testimony. And they sang hymns forever. They believed that he died for themselves on the cross, that is, that he died for their own sins, and that he overcame death and was resurrected three days later. A believer has eternal life. Believers received the Holy Spirit. This eternal Spirit is the assurance of their salvation. Amine.
"Jesus is risen, death is defeated,
Thank God, "
"Victory has been won,
Thank God. "
"Haleluya, haleluya
"Thank God."
God's chosen lineage, a holy nation
The priests of the king, you are his own people,
From the darkness to his own light, he summoned
God to proclaim, to proclaim your virtues, to proclaim your virtues. He called.
I was justified by canine, I
It is your blood that gives life,
You paid with your blood
My sin is expensive
You washed me white from snow
White,
Lord Isam,
Sacrifice of God.
The place where the painting is sold: www.sahibinden.com
Painting by: @ painter.sengezer
_________________________________________________________________________________
https://positive2345.blogspot.com/2020/07/bir-ressamn-yaptg-tablonun-yorumu.html

Interpretation of a Painting by a painter

Interpretation of a Painting by a painter

To be an art critic, one must first be a good painter. I am also a painter as well as a blog writer. This comes after my financial advisory profession. So I paint in my spare time. And I sell them on the Internet.
A few months ago I wanted to paint a picture of the Christian faith. I also placed a very high value on the price of this painting. This is the picture; 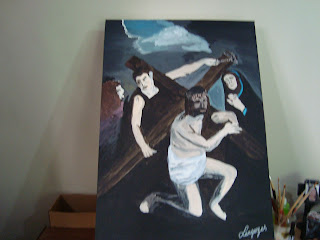 Send a message to your people to join your network.
Tell them you are here.
Learn More
Write an Article

Sunset on a Beach

The hourglass of Time

Diary Book of an artist of Salvatore Capriglione

Resuming the Surf’s Up Mentality

The Ache for Home exists in All of Us

Algerian Desert Functions as a Museum

Meet art lovers, galleries, artists from all over the world.

Publish your artworks for sale, commission free. Meet collectors and Galleries from +120 Countries.

Promote your gallery to collectors and art-lovers from all over the world and publish your exhibitions.

Promote your university, connect your alumni, create your own group and much more.